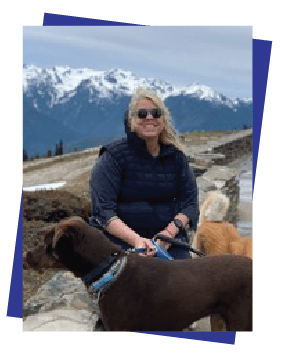 As a child growing up in Oregon, Dr. B’ey was so well known for her love of animals that neighborhood kids left sick creatures of all kinds at her family’s door, in hopes she could mend them back to health. Unsurprisingly, that young girl grew up to become a veterinarian, earning her DVM from Colorado State University. She also interned at Washington State University and spent some time at the University of Missouri before coming to Blue Mountain Animal Clinic.

Dr. B’ey shares her home with an uncoordinated young Pitsky mix named Thuja who originally lived as a street dog on a reservation in Arizona. Thuja likes to hunt and eat crickets and about anything else he thinks might be edible, which makes it fortuitous that his mom is a veterinarian! She also has a sassy old-lady Japanese Akita named Lollie who loves walks and sleeping in.

When she’s not working, Dr. B’ey enjoys gardening, exploring new places with friends and family, and going on hikes with her dogs. She’s thrilled to be living on the Olympic Peninsula and part of the Blue Mountain Animal Clinic team, doing what she loves with co-workers who share the same heart for animals.

At Blue Mountain Animal Clinic we strive to offer not only sound advice, but also optimal veterinary care, thus allowing you the enjoyment of your companion for a maximum number of years. Our goal is not only to treat your pet when he or she isn't feeling well, but also to help you learn how to keep your best friend happy and healthy. At Blue Mountain Animal Clinic, you, your pets and your other family members become a part of our larger BMAC "family." We look forward to getting to know you and yours.